Two major exhibitions took place in 2012, in Beijing and then in Canton.
The exhibitions both included around thirty paintings from the Schmates series and a monumental installation of 25m long and on stairs at Beijing, specially produced for the Festival Croisements.
- Punctuation marks and more precisely the question mark and the parenthesis were the guiding reasons. These signs, common to both languages and the sound Ma, which indicates the interrogative form in Chinese, are the start of a reflection on our questions.
-The photos, with the exception of the last two, are taken at EMG art center Beijing. The last two at EMG art center Canton. 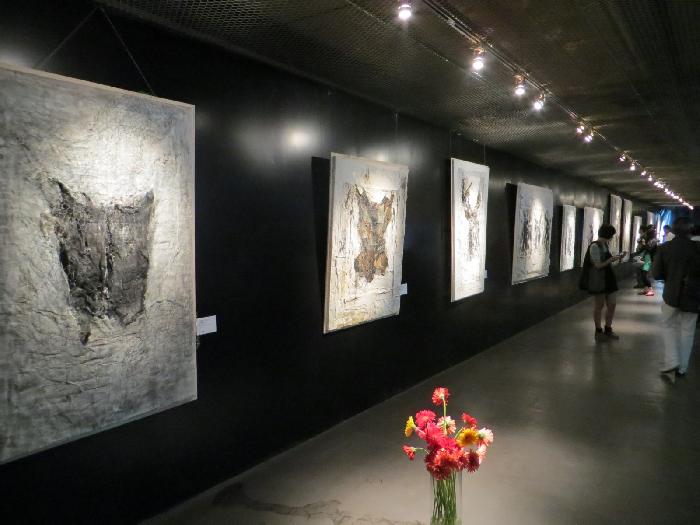 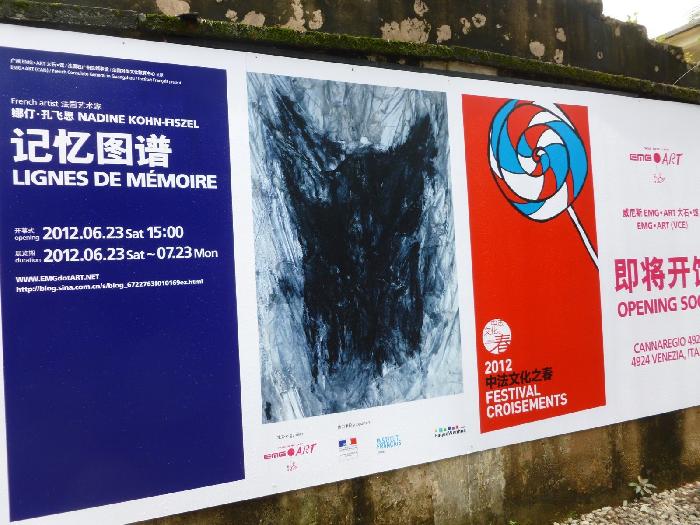 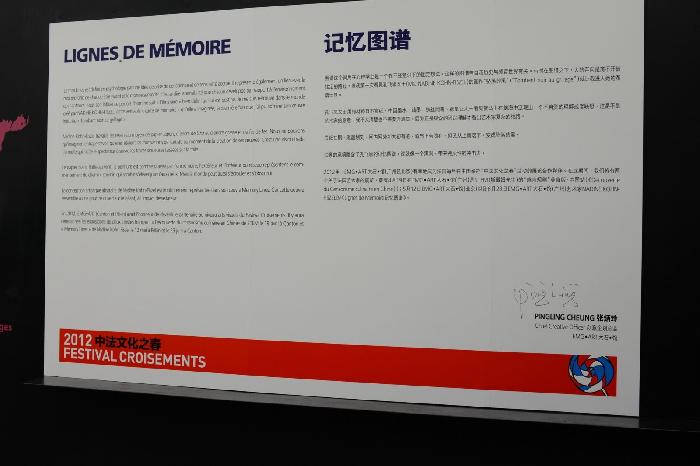 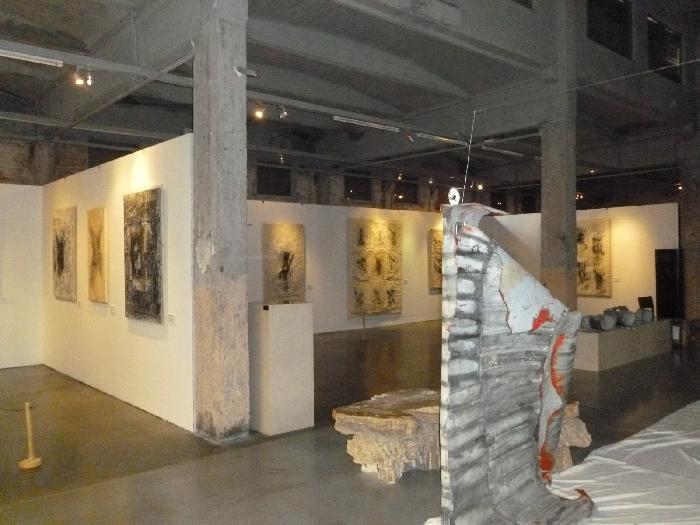 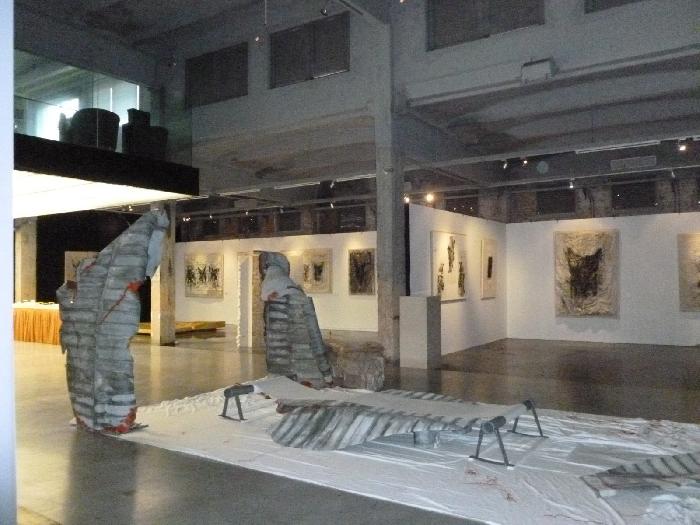 Article of the China daily concerning the exhibition Memory lane

Video of this installation

How to shape signs
- How can we suggest through signs a world of sounds, of visual meanings, of new poetical associations, different and yet complementary?
-Punctuation marks - especially the question mark - give words sonorities that express interrogation in French and Chinese.
-In this work I have shaped signs: something like new emoticons or smileys, these series of punctuation so often used in e-mail communication by young people, especially in China.

have traced punctuation marks, commas in the shape of pins. I have drawn lines: hyphens, question marks; I have opened and closed brackets; all of them signs of doubt and asides.
- Parenthesis (brackets), inserted in the text, without modifying its meaning conveys further information. Like an oval door it opens on a space of doubt and questioning. It enables discontinuity and digression; it accompanies my way of thinking and helps limit explanations.
-This way of thinking and of creating, rhizome -like, proceeds by rebounds and resonance.

Punctuation, which was codified in France as soon as the eighth century facilitates the reading of texts. The written text – up to then interpretable and difficult to segment - was clarified and became a language in itself, modulated by blanks, stops, pauses, and voids. These voids – neither interruption nor nothingness – are in Chinese Art an active principle, engendering breath, and fundamental in the process of creation. Punctuated reading with its changes of intonation, of inspiration engenders rhythm. Melodic inflections, codified cantilation and declamation are made possible. –br
-In its beginning the question mark was more like a dot topped with a line zigzagging towards the right, no doubt echoing the ascending tone of the human voice. Drawn upside down it rapidly acquired its current shape. (Note that in Spanish there still is an inverted question mark at the beginning of the sentence and a question mark at the end). In (written) French the inversion of pronoun and verb is required. As soon as the eye perceives the question mark at the end of a sentence, the vocal tone is raised as on this flight of stairs.

The first time I met Ms. Nadine Kohn-Fiszel was during Art Canton 2010, among those art works shown in the Art Fair, not like the other artists who tried to express their emotions and concepts, attempting to display their inner world as much as they could, Nadine wanted to let go whatever left in the past, or existed at the present, or will come in the future. There was a force which contained within her works and dissolved everything in front. “Tombant noir au grillage” is one of my favorite paintings, the composition and perspective of the painting have an invisible power to attract the attentions and grasp the viewer into the “black hole” of memory. The door to the unknown world arouses the curiosity, at the meantime brings the fear to the surface of consciousness. But the iron mesh forges a blockage, symbolizing a memory unbearable to recall, a spiritual struggle, and a painful breath, but everything will be washed away as time goes by. Nadine uses a way of “lightness” to handle the “heaviness” of heart and memory, she guides you to explore far into the depth of memory, meanwhile obstructs the “entry” and “information embedding”. The tableau she presents in a western way has surprisingly the similarity with the one of Chinese ink and wash drawing. Every time when I see the painting, I can’t help holding my breath, the desire of peeking the secrets of soul is increased, but restrained by another kind of power at the same time. The tension puts the viewer in dilemma, and drives him or her to explore more about human nature. It’s as if you were going through a meditation every time when you gaze at the painting. The art work reflects a kind of loneliness and coldness as well as a sense of historical heaviness, moreover, it always give you a feeling of nihility. As Genesis of Bible says: in the beginning, God created the heavens and the earth with “word”, but Nadine dissolves what He created with her “painting”. The installation “Ma River” is surrounded by her paintings in EMG Gallery Beijing. The huge reversed question mark made of the metal zinc is placed on the ascending steps in the center of the art space. On the top step there is a big dot which is part of the question mark, symbolizing the origin of everything in the world. In Chinese, the word “ma” is put at the end of the sentence, thus becomes an interrogative sentence. And the sound “ma” is the first incantation (dharani). “The earth was without form, and void; and darkness was on the face of the deep. And the spirit of God was hovering over the face of the waters. Then God said, “let there be light”; and there was light”. God created the world with “word”, and the “word” is the sound made out of God. The installation draws the viewer back to the beginning (the origin), and confronts him or her with a big question mark “why”. On the other hand, the reversed question mark suggests that the earth is only the shadow of heaven, and what we see with our eyes are only the reflection on the surface of water. The “ human backs” in the paintings around the installation stand in the threshold, hesitating between past, present and future, but all the forces come from the origin, the source, and the question mark, everything is connected, and all those paintings become the extension of the installation. What is to be is decided by what it was originally. The installation generates a great power at the centre like a spring of water, and the spring becomes a river, and the river flows into the sea… “I am the way, the truth, and the life, no one comes to the Father except through me”, here “me” stands for “ma” – the question mark ”?”… 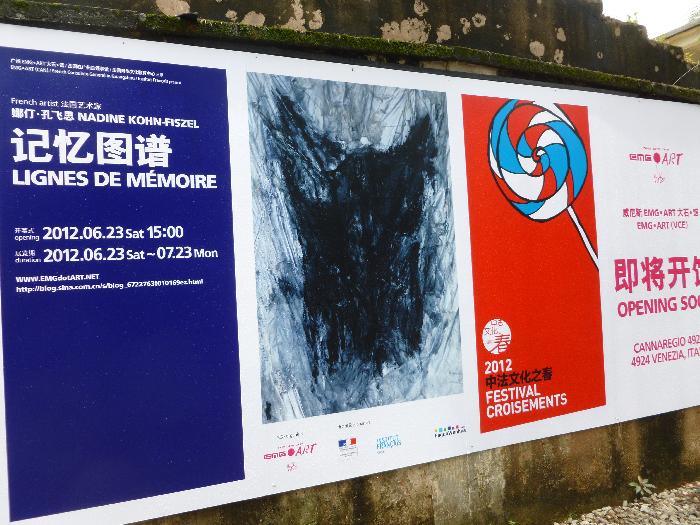 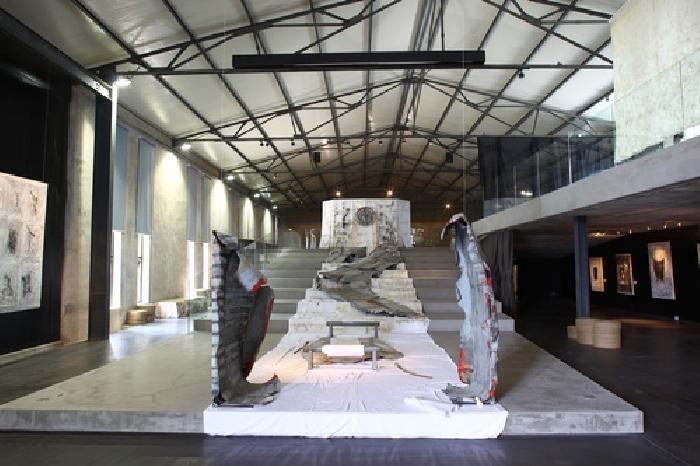 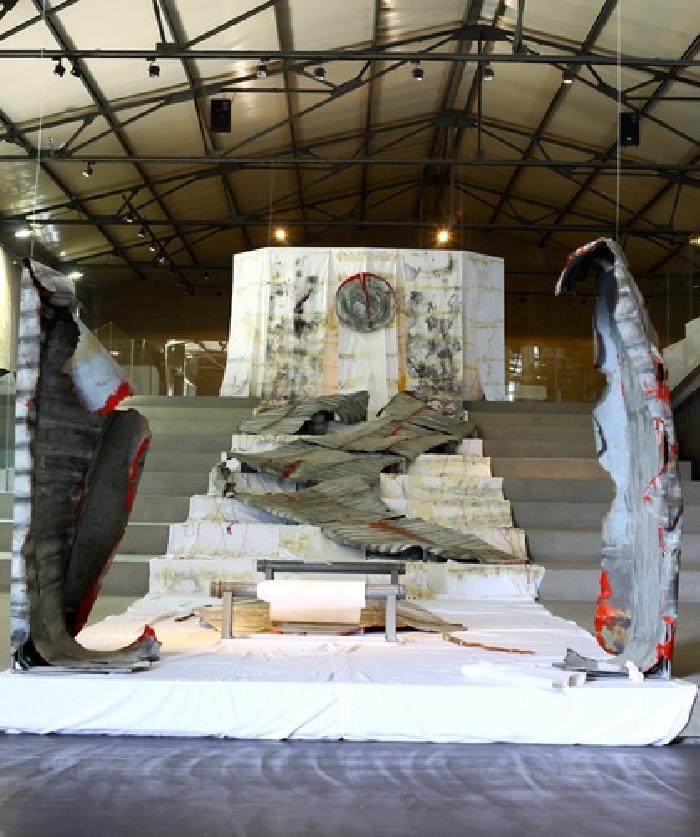 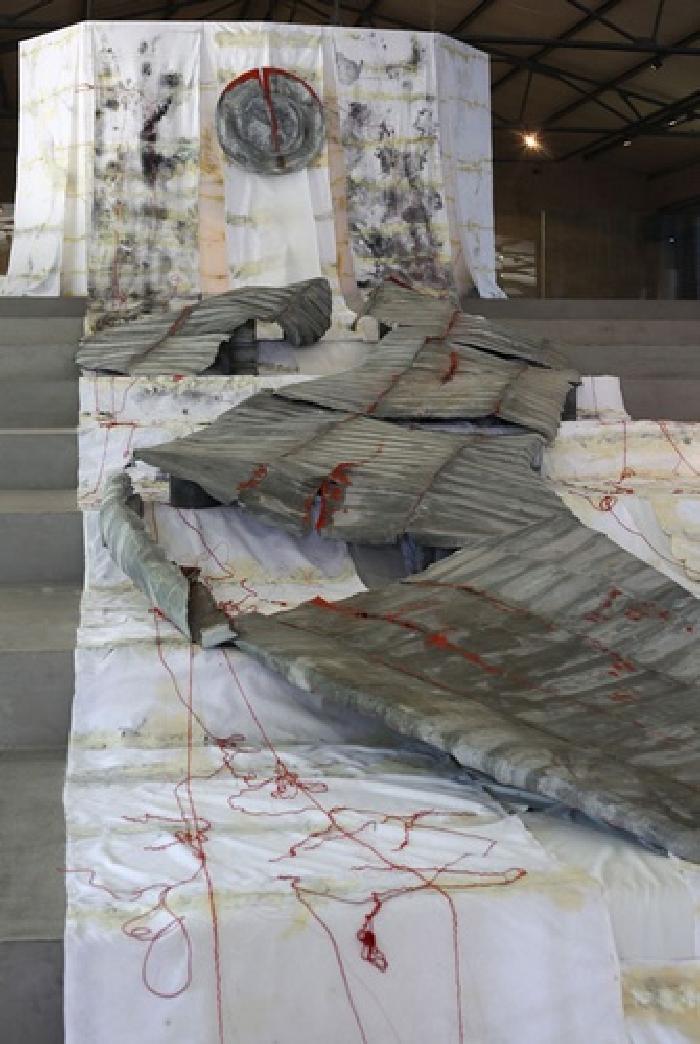 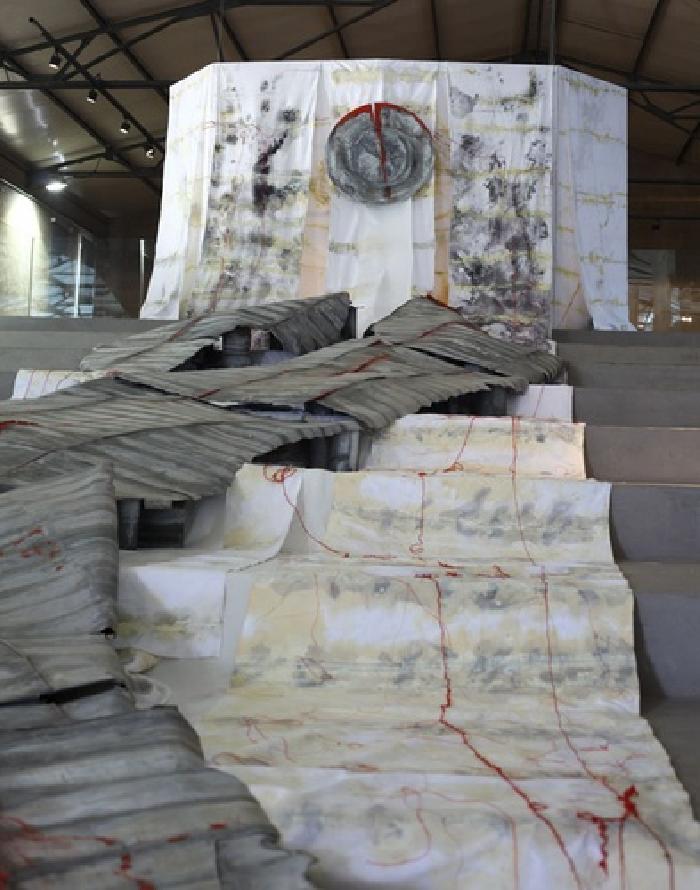 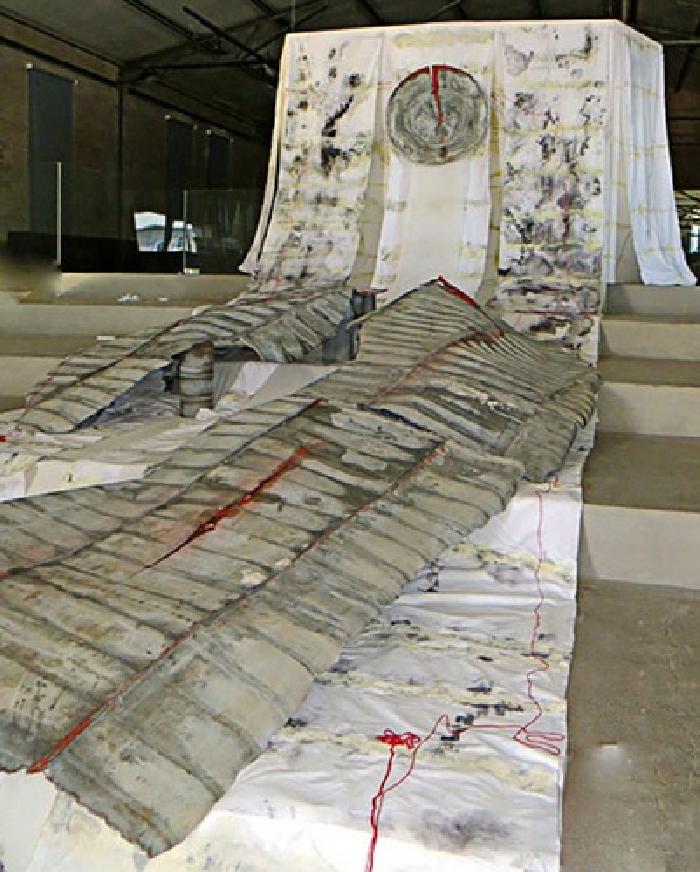 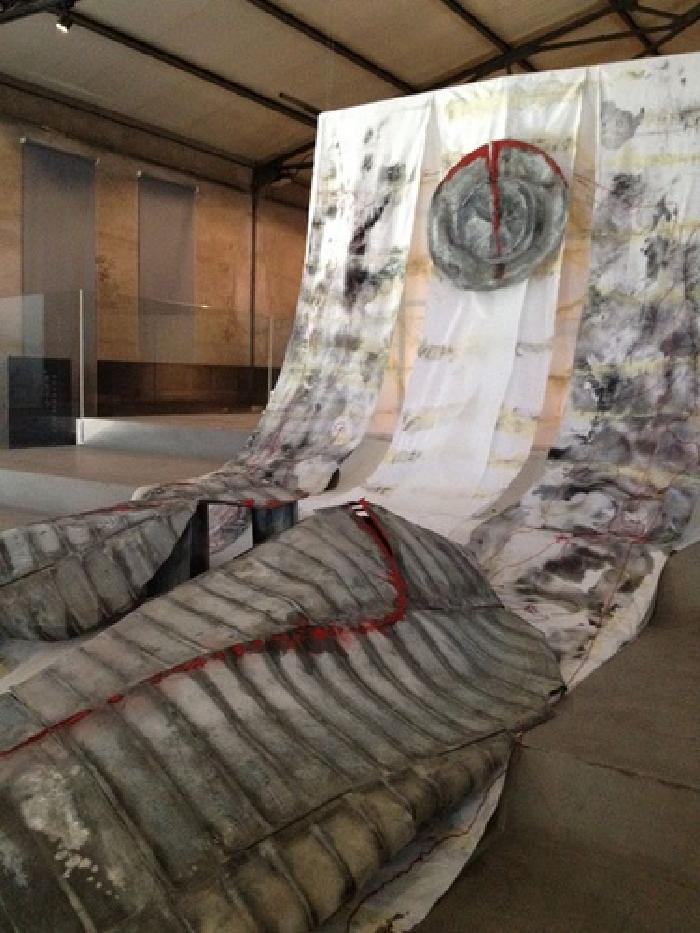 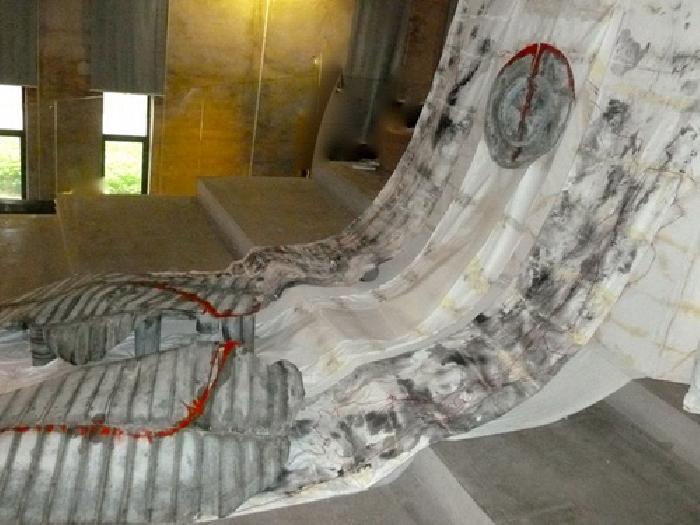 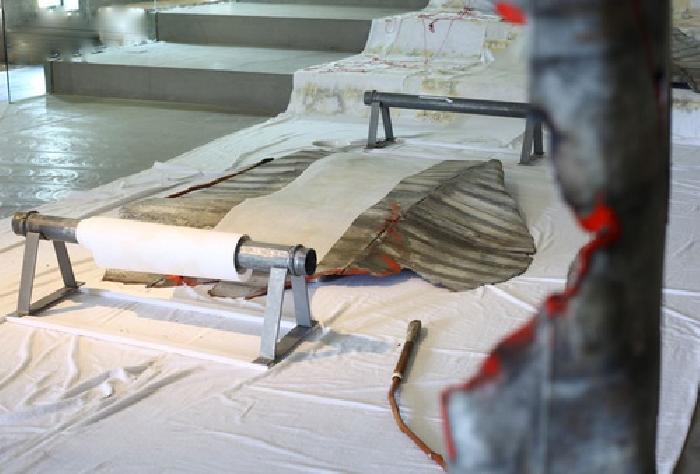 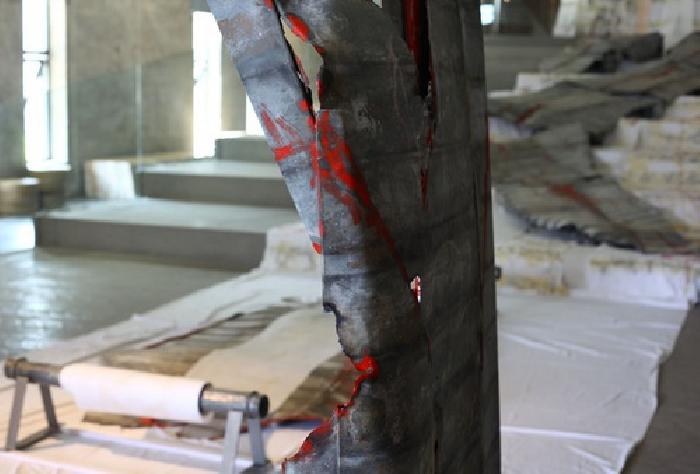 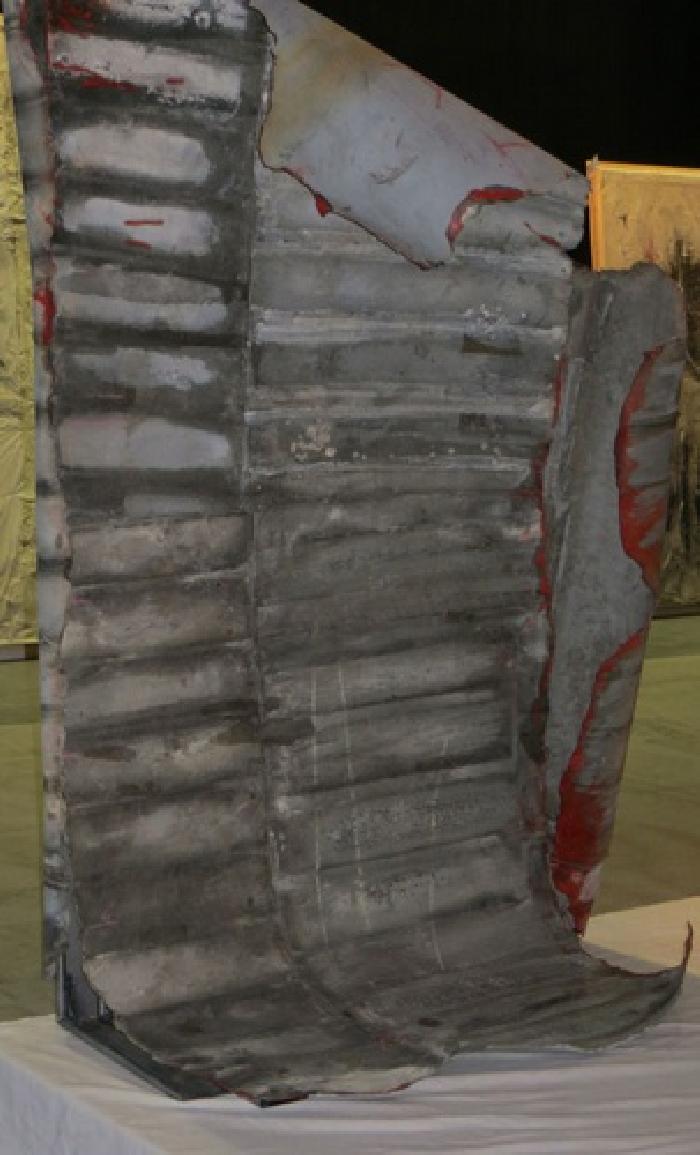 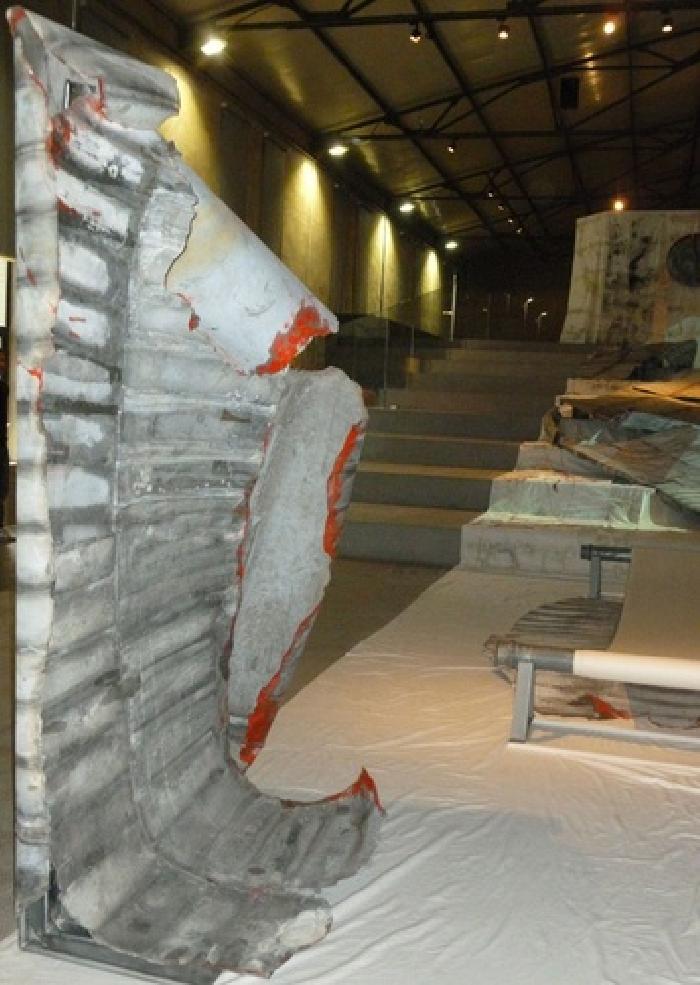 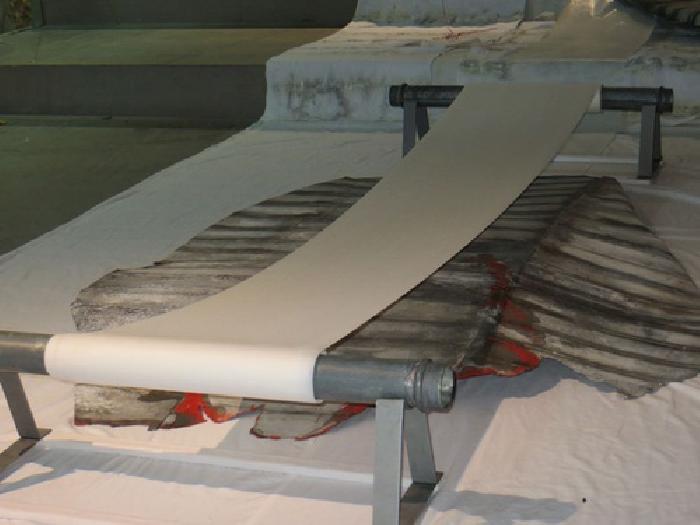 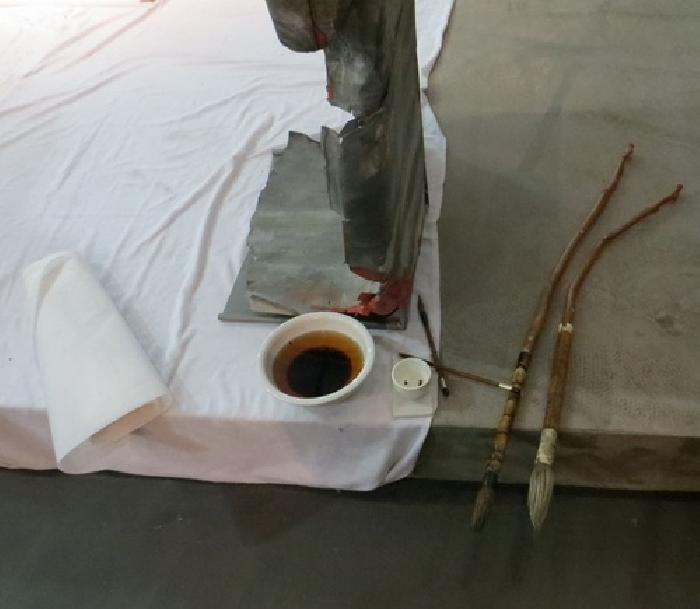 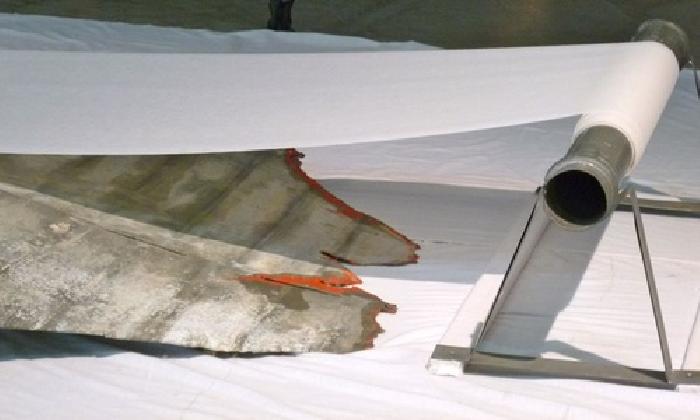 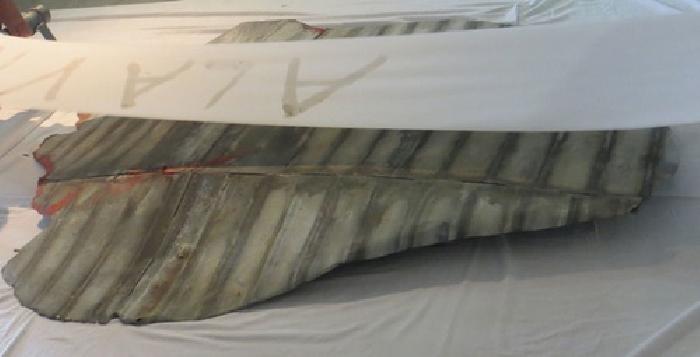 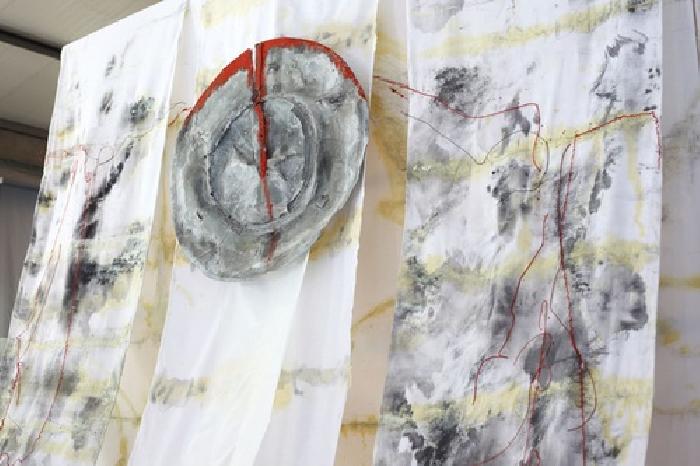 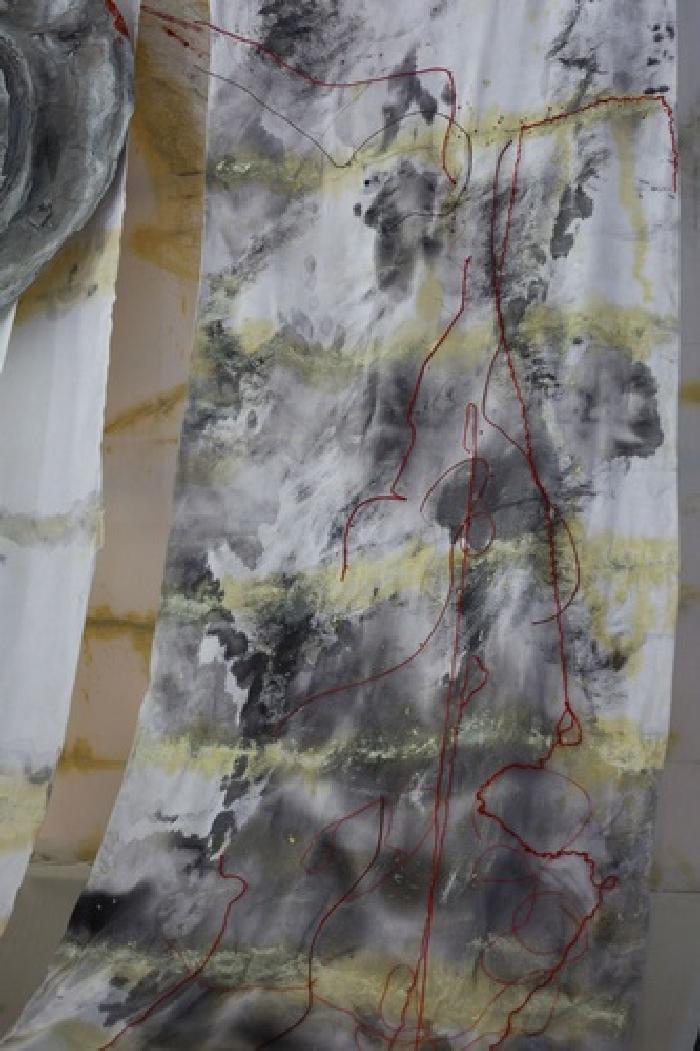 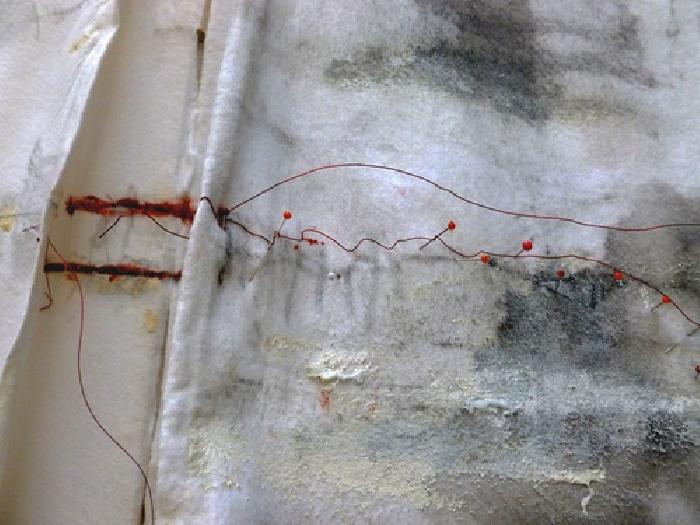 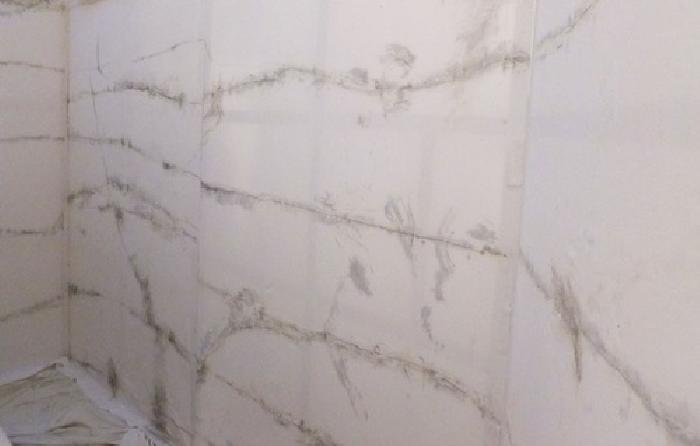 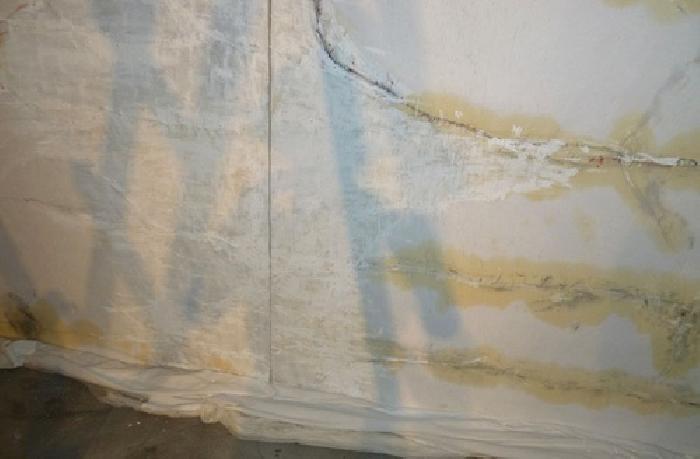 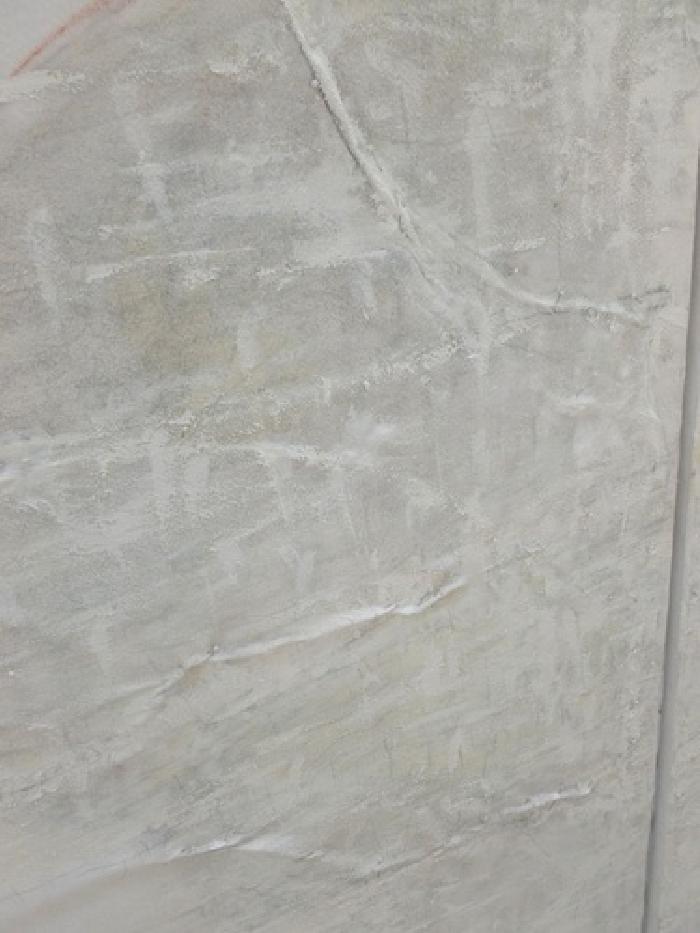 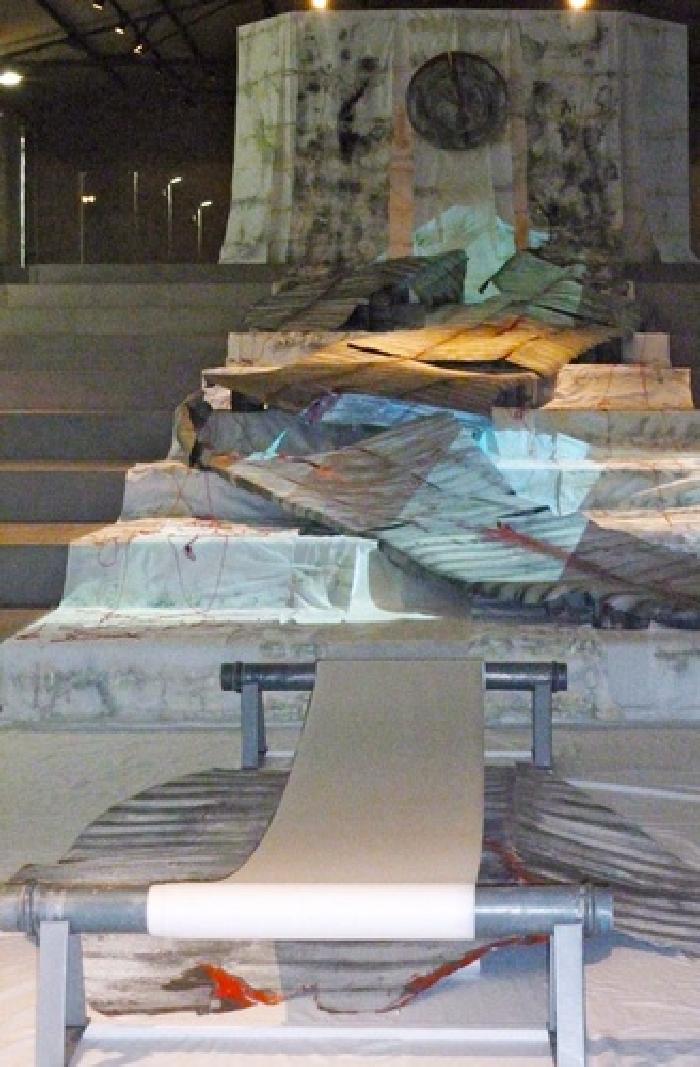 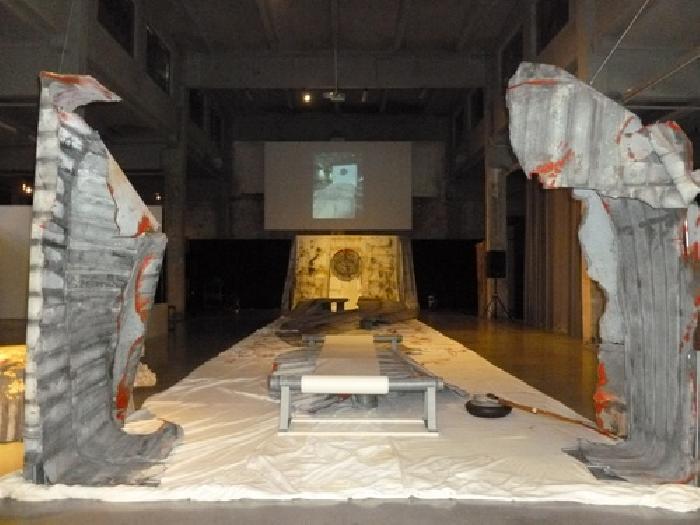 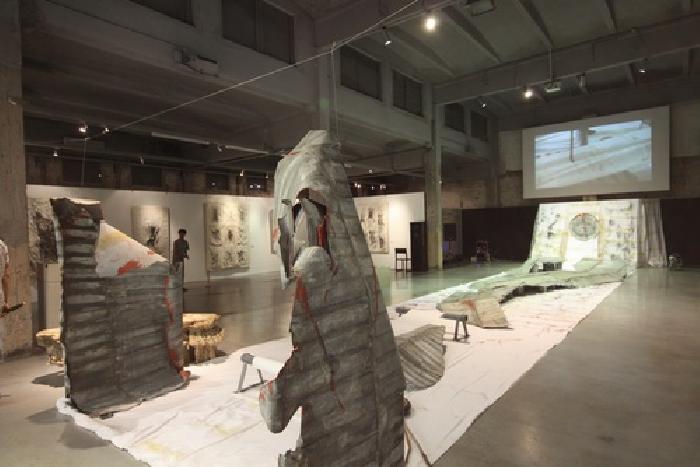